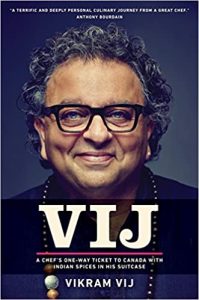 Vikram Vij, one of Canada’s great chefs, shares his story of the trials and triumphs in building a world-renowned food empire

Fragrant with the smells of cumin, turmeric, fennel, and cloves, Vij reveals the story of Vikram Vij, one of Canada’s most celebrated chefs and entrepreneurs. Co-owner of the world-famous Vij’s Restaurant in Vancouver, his story is a true rags-to-riches tale of a college dropout from northern India who made it to Europe’s temples of high cuisine, then with a one-way ticket bound for Canada, found fame serving some of the world’s most transcendent Indian cuisine. Vij’s Restaurant, originally a fourteen-seat establishment known for its extraordinary flavours and spice blends, along with a firm no-reservation policy, received accolades from restaurant critics and patrons alike.

A culinary journey that began in India as a boy enjoying the praise of visitors for his chai and biscuits, Vikram’s passion for Indian cooking and his lifelong mission to bring awareness to the culture he left behind have fueled his tireless drive in building a world-renowned food empire. Driven to succeed, Vikram realized his dream to launch five major initiatives under the Vij’s brand by age fifty, but with challenges and sacrifices along the way.

For the first time, Vikram opens up about his struggles with prejudice, his mentors’ lasting lessons, and the painful demise of his marriage—both the successes and the failures that have shaped and sharpened one of Canada’s most unique and revered culinary talents.