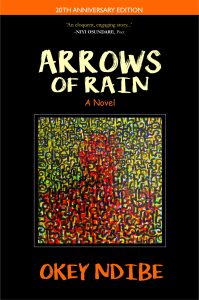 In the fictional country of Madia, a prostitute runs into the sea and drowns. The last man who spoke to her, the ‘madman’ Bukuru, is arrested and charged with murder. In court, Bukuru, representing himself, counters the charges with bombshell allegations. He speaks of government complicity in a series of atrocities, accusing the Madian ruler of rape and murder. His startling testimony is hushed up and Bukuru is sent back to prison, where his fate is grim. When a young journalist wangles a visit to his cell, they journey through turbulent decades of history that illuminate Bukuru’s life and the nation’s.

Brave and powerful, Arrows of Rain brilliantly dramatises complex factors behind the near-collapse of a nation. It is the lyrical, resonant and propulsive first novel by one of the most exciting contemporary novelists. 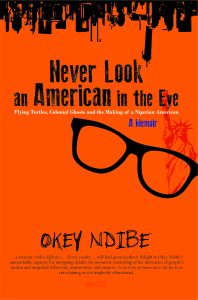 Never Look An American In The Eye

Okey Ndibe’s funny, charming, and penetrating memoir tells of his move from Nigeria to America, where he came to edit the influential—but forever teetering on the verge of insolvency—African Commentary magazine. It recounts stories of Ndibe’s relationships with Chinua Achebe, Wole Soyinka, and other literary figures; examines the differences between Nigerian and American etiquette and politics; recalls an incident of racial profiling just 13 days after he arrived in the US, in which he was mistaken for a bank robber; considers American stereotypes about Africa (and vice-versa); and juxtaposes African folk tales with Wall Street trickery. All these stories and more come together in a generous, encompassing book about the making of a writer and a new American.