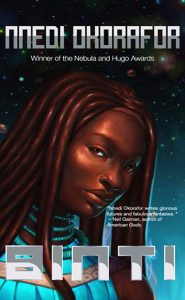 Her name is Binti, and she is the first of the Himba people ever to be offered a place at Oomza University, the finest institution of higher learning in the galaxy. But to accept the offer will mean giving up her place in her family to travel between the stars among strangers who do not share her ways or respect her customs.

Knowledge comes at a cost, one that Binti is willing to pay, but her journey will not be easy. The world she seeks to enter has long warred with the Meduse, an alien race that has become the stuff of nightmares. Oomza University has wronged the Meduse, and Binti’s stellar travel will bring her within their deadly reach.

If Binti hopes to survive the legacy of a war not of her making, she will need both the the gifts of her people and the wisdom enshrined within the University, itself – but first she has to make it there, alive. 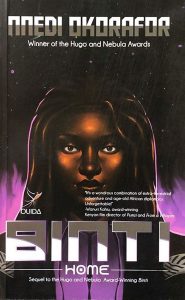 And now she must return home to her people, with her friend Okwu by her side, to face her family and face her elders.

But Okwu will be the first of his race to set foot on Earth in over a hundred years, and the first ever to come in peace.

After generations of conflict can human and Meduse ever learn to truly live in harmony? 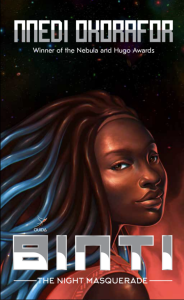 The concluding part of the highly-acclaimed science fiction trilogy that began with Nnedi Okorafor’s Hugo- and Nebula Award-winning BINTI.

Binti has returned to her home planet, believing that the violence of the Meduse has been left behind. Unfortunately, although her people are peaceful on the whole, the same cannot be said for the Khoush, who fan the flames of their ancient rivalry with the Meduse.

Far from her village when the conflicts start, Binti hurries home, but anger and resentment has already claimed the lives of many close to her.

Once again it is up to Binti, and her intriguing new friend Mwinyi, to intervene—though the elders of her people do not entirely trust her motives—and try to prevent a war that could wipe out her people, once and for all. Nnamdi’s father was a good chief of police, perhaps the best Kalaria had ever had. He was determined to root out the criminals that had invaded the town. But then he was murdered, and most people believed the Chief of Chiefs, most powerful of the criminals, was responsible. Nnamdi has vowed to avenge his father, but he wonders what a twelve-year-old boy can do. Until a mysterious nighttime meeting, the gift of a magical object that enables super powers, and a charge to use those powers for good changes his life forever. How can he fulfill his mission? How will he learn to control his newfound powers?

Award-winning Nnedi Okorafor, acclaimed for her Akata novels, introduces a new and engaging hero in her first novel for middle grade readers set against a richly textured background of contemporary Nigeria. 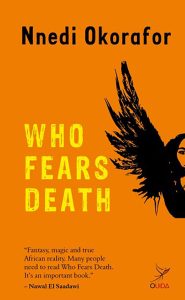 An award-winning literary author enters the world of magical realism with her World Fantasy Award-winning novel of a remarkable woman in post-apocalyptic Africa.

In a post-apocalyptic Africa, the world has changed in many ways; yet in one region genocide between tribes still bloodies the land. A woman who has survived the annihilation of her village and a terrible rape by an enemy general wanders into the desert, hoping to die. Instead, she gives birth to an angry baby girl with hair and skin the color of sand. Gripped by the certainty that her daughter is different—special—she names her Onyesonwu, which means “Who fears death?” in an ancient language.

It doesn’t take long for Onye to understand that she is physically and socially marked by the circumstances of her conception. She is Ewu—a child of rape who is expected to live a life of violence, a half-breed rejected by her community. But Onye is not the average Ewu. Even as a child, she manifests the beginnings of a remarkable and unique magic. As she grows, so do her abilities, and during an inadvertent visit to the spirit realm, she learns something terrifying: someone powerful is trying to kill her.

Desperate to elude her would-be murderer and to understand her own nature, she embarks on a journey in which she grapples with nature, tradition, history, true love, and the spiritual mysteries of her culture, and ultimately learns why she was given the name she bears: Who Fears Death.