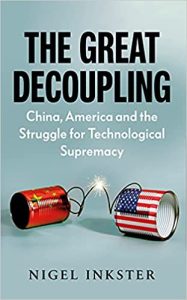 For much of recorded history, China was a leading science and technology power. But just as the West rose, China turned in on itself, and missed the Industrial Revolution. The result was the ‘Hundred Years of Humiliation’, and a long struggle for a modern, yet distinctly Chinese,
civilisational identity. Today, technological innovation has returned to the core of national pride and ambition.

Since the 1980s, reforms have transformed China into the world’s second largest economy and a major global power. Cyber space and other advanced technologies have become a battleground for international dominance; but today’s world relies on global supply chains and interstate collaboration–at
least, for now. Growing tension between the USA and China could result in the two superpowers decoupling their technology–with significant consequences for humanity’s future.

The Great Decoupling shows that this technology contest, and how it plays out, will shape the geopolitics of the twenty-first century.