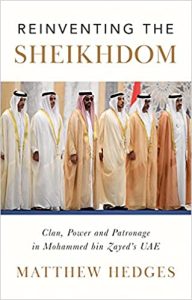 Though the Arab Spring has reverberated through the Middle East, largely leaving a path of destruction, the relative calm in the United Arab Emirates has offered a regional roadmap for stability. Domestic changes since 2000 have significantly altered the country’s dynamics, firmly cementing power within the Emirates’ evolution has largely been accredited to Abu Dhabi’s crown prince, Mohammed bin Zayed.

His reign has been characterised by the rise of the security apparatus and a micromanaged approach to governance. Mohammed bin Zayed’s strategy of fortification has focused on pre-empting threats from the UAE’s native population, rather than from expatriates or foreign actors. As a result, he has consolidated power, distributing its administration among his tribal and kinship allies. In essence, Mohammed bin Zayed has driven modernisation in order to strengthen his grasp on power.

This book explores Mohammed bin Zayed’s regime security strategy, illustrating the network of alliances that seek to support his reign and that of his family. In an ever-turbulent region, the UAE remains critical to understanding the evolution of Middle Eastern authoritarian control.