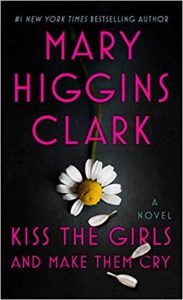 Kiss The Girls And Make Them Cry

When investigative journalist Gina Kane receives an email from a “CRyan” describing her “terrible experience” while working at REL, a high-profile television news network, Gina knows she has to pursue the story. But when Ryan goes silent, Gina is shocked to discover the young woman has died tragically in a jet ski accident while on holiday.

Meanwhile, REL counsel Michael Carter finds himself in a tricky spot as several more female employees have come forward with allegations of sexual misconduct. Carter approaches the CEO, offering to persuade the victims to accept settlements in exchange for their silence. It’s a risky endeavor, but it could well make him rich.

As more allegations emerge, Carter’s attempts to keep the story from making headlines are matched only by Gina Kane’s determination to uncover the truth. Was Ryan’s death truly an accident? And when another accuser turns up dead, Gina realizes someone—or some people—will go to depraved lengths to keep the story from seeing the light. Hours after throwing a third birthday party for their twins Kathy and Kelly in their Connecticut home, Margaret and Steve Frawley return home from a dinner in New York to discover the police in the house, their daughters missing, and an eight million dollar ransom note. The Frawleys meet the kidnapper’s demands, but the abandoned car they’re led to contains only Kelly, the body of the driver, and a suicide note, saying he had inadvertently killed Kathy and dumped her body in the ocean.

At the private memorial Mass for Kathy, Kelly tugs Margaret’s arm and says that her sister Kathy “wants to come home right now.” More unexplainable occurrences indicate that Kelly is in touch with Kathy, but no one except Margaret believes that Kathy is still alive. As Kelly’s warnings become increasingly specific and alarming, however, FBI agents set out on a search for the kidnappers as Kathy’s life hangs by a thread.

Delving into the well-documented but still unexplained phenomenon of twin telepathy, worldwide #1 bestseller Mary Higgins Clark takes us deep into the minds of her characters while lifting us to the heights of suspense.