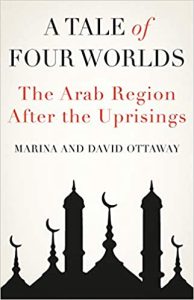 A Tale Of Two Worlds

First came the disintegration of the Ottoman Empire following World War I; then, in the 1950s and ’60s, the Nasser-inspired wave of Arab nationalism and socialism. The Arab world’s third great political cataclysm of the past 100 years has also brought permanent changes, but not as its activists had hoped: the 2011 uprisings. Their consequences have differed greatly from area to area, splintering the Arab region into four different worlds. The Levant states have disintegrated, possibly irreversibly. The Gulf monarchies have embarked on far- reaching plans of economic and social change to stave off discontent. Egypt has retreated into military authoritarianism and a war on Islamists, threatening its future stability.

Only the Maghreb countries, which have started integrating Islamists into their political systems, offer some hope for progress toward democracy. Marina and David Ottaway have brought together fifty years of experience observing the Arab world, and a wealth of first-hand information gathered from living and travelling extensively in the region. A Tale of Four Worlds is an indispensable analysis of the profound upheavals that have shaken–and continue to transform–Arab and global politics.