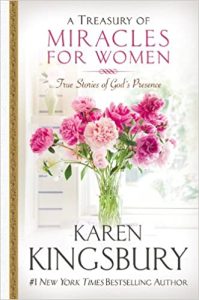 A Treasury of Miracles for Women

#1 New York Times bestselling author Karen Kingsbury shares a collection of inspiring true stories from women whose faith has sustained them through monumental trials. For mothers, wives, sisters, and friends, this book will uplift the hearts of its readers through accounts of faith proving triumphant over any obstacle. #1 New York Times bestselling author Karen Kingsbury has written a modern-day classic with this unforgettable love story set against the struggle of the American bookstore. Molly Allen lives alone in Portland, but she left her heart back in Tennessee when she walked away from Ryan five years ago. They had a rare sort of love she hasn’t found since.

Ryan Kelly lives in Nashville after a broken engagement and several years on the road touring with a country music duo. Sometimes when he’s lonely, he visits The Bridge—the oldest bookstore in historic downtown Franklin—and remembers the hours he and Molly once spent there.

For over four decades, Charlie and Donna Barton have run The Bridge, providing customers with coffee, conversation, and shelves of classics—even through dismal sales and the rise of digital books. Then the hundred-year flood sweeps through Franklin and destroys everything. The bank is about to pull the store’s lease when tragedy strikes. Can two generations of readers rally together to save The Bridge? And is it possible that an unforgettable love might lead to the miracle of a second chance? 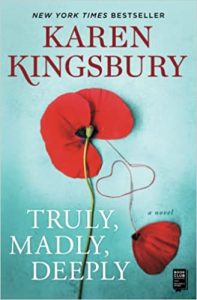 When eighteen-year-old Tommy Baxter declares to his family that he wants to be a police officer after graduation, his mother, Reagan, won’t hear of it. After all, she’s still mourning the death of her own father on September 11 and she’s determined to keep her son safe from danger. But Tommy’s father, Luke, is proud of Tommy’s decision. He would make a kind and compassionate cop.

Meanwhile, Tommy is in love for the first time. His sweet relationship with Annalee Miller is almost too good to be true. Tommy begins seriously thinking about the far off day when he can ask her to marry him but she hasn’t been feeling well. Tests reveal the unthinkable.

While his girlfriend begins the fight of her life, Tommy is driven to learn more about the circumstances surrounding his birth and the grandfather he never knew. Secrets come to light that rock Tommy’s world, and he becomes determined to spend his future fighting crime and bringing peace to the streets. Or is this just his way to fight a battle he cannot win—the one facing Annalee?

Blending romance and family drama, Truly, Madly,Deeply shows us that, in the shadow of great loss, the only way to live with passion is truly, madly, deeply.