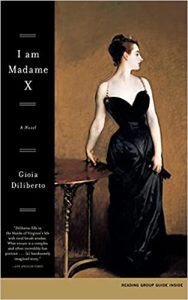 I Am Madam X

When John Singer Sargent unveiled Madame X — his famous portrait of American beauty Virginie Gautreau — at the 1884 Paris Salon, its subject’s bold pose and provocative dress shocked the public and the critics, smashing Sargent’s dreams of a Paris career.

In this remarkable novel, Gioia Diliberto tells Virginie’s story, drawing on the sketchy historical facts to re-create Virginie’s tempestuous personality and the captivating milieu of nineteenth-century Paris. Born in New Orleans and raised on a lush plantation, Virginie fled to France during the Civil War, where she was absorbed into the fascinating and wealthy world of grand ballrooms, dressmakers’ salons, and artists’ ateliers. Even before Sargent painted her portrait, Virginie’s reputation for promiscuity and showy self-display made her the subject of vicious Paris gossip.

Immersing the reader in Belle Epoque Paris, I Am Madame X is a compulsively readable and richly imagined novel illuminating the struggle between Virginie and Sargent over the outcome of a painting that changed their lives and affected the course of art history.