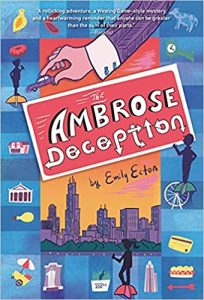 Not a single one of Melissa, Wilf, or Bondi’s middle school teachers would considerer them a star student. Yet to everyone’s surprise, Melissa, WIlf, and Bondi are the three students chosen to compete for a ten thousand-dollar scholarship, solving clues that lead them to various locations around Chicago. None of the kids have heard of the scholarship before, but the rules seem simple enough: solve clues, take photo proof, and win money.

At first the three contestants work independently, but it doesn’t take long before each begins to wonder whether the competition is a sham. It’s only by secretly joining forces and using their unique talents that the trio is able to uncover the truth behind the Ambrose Deception — a truth that involves a lot more than just a scholarship.

With a narrative style as varied and intriguing as the mystery itself, this adventure involving clever clues, plenty of perks, and abhorrent adults is pure wish fulfillment.