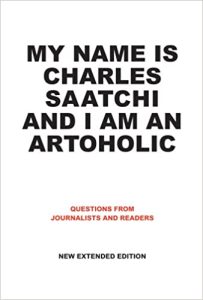 My Name is Charles Saatchi and I Am An Artoholic

Q: Do you care what people think?

A: Everyone cares what people think, but luckily I seem to care less than most.

Charles Saatchi is one of the moving forces of the modern age. Founder of the global advertising agency Saatchi & Saatchi, and the most influential art collector of our time, he has vigorously shaped the contemporary art scene. His exhibitions, notably 1997’s Sensation exhibition of the so-called Young British Artists—Damien Hirst, Tracey Emin, and Chris Ofili, among others—at the Royal Academy of Art, London, and at the Brooklyn Museum of Art, New York, sparked an explosion of controversy. Though he famously refuses to be interviewed, in this book he provides frank, genuine responses to questions from journalists and critics as well as members of the public.