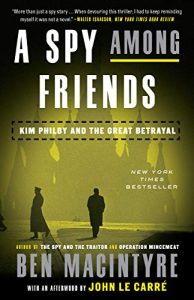 A Spy Among Friends

Who was Kim Philby? Those closest to him—like his fellow MI6 officer and best friend since childhood, Nicholas Elliot, and the CIA’s head of counterintelligence, James Jesus Angleton—knew him as a loyal confidant and an unshakeable patriot. Philby was a brilliant and charming man who rose to head Britain’s counterintelligence against the Soviet Union. Together with Elliott and Angleton he stood on the front lines of the Cold War, holding Communism at bay. But he was secretly betraying them both: He was working for the Russians the entire time.

Every word uttered in confidence to Philby by his colleagues in the West made its way to Moscow, leading countless missions to their doom and subverting American and British attempts to subdue the Soviet threat. So how was this cunning double-agent finally exposed? In A Spy Among Friends, Ben Macintyre expertly weaves the heart-pounding tale of how Philby almost got away with it all—and what happened when he was finally unmasked.

Based on personal papers and never-before-seen British intelligence files, this is Ben Macintyre’s epic telling of one of the greatest spy stories ever, a Cold War history that will keep you on the edge of your seat.