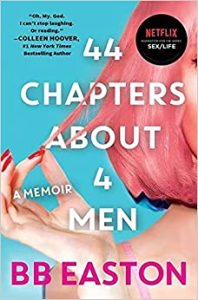 One woman’s secret journal completely changes her marriage in this hilarious and biting memoir—the inspiration for the Netflix Original Series SEX/LIFE. School psychologists aren’t supposed to write books about sex. Doing so would be considered “unethical” and “a fireable offense.”

Lucky for you, ethics was never my strong suit. Sex/Life: 44 Chapters About 4 Men is a laugh-out-loud funny and brutally honest look at female sexuality, as told through the razor-sharp lens of domesticated bad girl BB Easton. No one and nothing is off limits as BB revisits the ex-boyfriends—a sadistic tattoo artist, a punk rock parolee, and a heavy metal bass player—that led her to finally find true love with a straight-laced, drop-dead-gorgeous . . . accountant. After settling down and starting a family with her perfectly vanilla “husbot,” Ken, BB finds herself longing for the reckless passion she had in her youth. She begins to write about these escapades in a secret journal, just for fun, but when Ken starts to act out the words on the pages, BB realizes that she might have stumbled upon the holy grail of behavior modification techniques.

The psychological dance that ensues is nothing short of hilarious as BB wields her journal like a blowtorch, trying to light a fire under her cold, distant partner. Sometimes it works, sometimes it doesn’t, but in the end, BB learns that the man she was trying so hard to change was perfect for her all along.