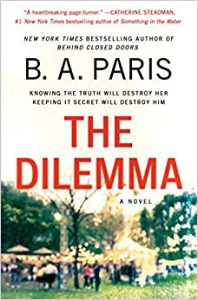 It’s Livia’s 40th birthday, and her husband Adam is throwing her the party of a lifetime to make up for the wedding they never had. Everyone she loves will be there, except her daughter Marnie, who’s studying abroad. But Livia is secretly glad Marnie won’t be there.

Livia has recently uncovered a secret about their daughter which, if revealed, will shake the foundation of their family to its core. She needs to tell Adam, but she’s waiting until the party is over so they can have this last happy time together.

Adam, meanwhile, has his own surprise for Livia: he’s arranged for Marnie to secretly fly back for the party. But before Marnie arrives, Adam hears some terrible news. Now he too is faced with a dilemma: Does he share what he’s learned with his wife? Is hiding the truth the same as telling a lie? And how far are Adam and Livia willing to go to protect the ones they love―and give each other a last few hours of happiness?