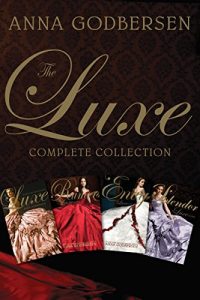 Manhattan, 1899: In a world of luxury and deception, where appearance matters above everything and breaking the social code means running the risk of being ostracized forever, five teenagers lead dangerously scandalous lives. This thrilling trip to the age of innocence is anything but innocent.

The Luxe: Beautiful sisters Elizabeth and Diana Holland rule Manhattan’s social scene. Or so it appears. When the girls discover their status among New York City’s elite is far from secure, suddenly everyone—from the backstabbing socialite Penelope Hayes, to the debonair bachelor Henry Schoonmaker, to the spiteful maid Lina Broud—threatens Elizabeth’s and Diana’s golden future.

Rumors: As rumors fly about the untimely demise of New York’s brightest star, Elizabeth Holland, all eyes are on those closest to the dearly departed: her sister, Diana, the family’s only hope for redemption; Henry Schoonmaker, the flame Elizabeth never extinguished; Penelope Hayes, poised to claim all that her best friend left behind; even Elizabeth’s former maid, Lina Broud, who discovers that while money matters and breeding counts, gossip is the new currency.

Envy: Two months after Elizabeth Holland’s dramatic homecoming, Manhattan eagerly awaits her return to the pinnacle of society. But all is not as it seems behind the stately doors of No. 17 Gramercy Park South. Farther uptown, Henry and Penelope Schoonmaker are the city’s most celebrated couple. But the newlyweds share little more than scorn for each other. And while the newspapers call Penelope’s social-climbing best friend, Carolina Broad, an heiress, her fortune—and her fame—are anything but secure, especially now that one of society’s darlings is slipping tales to the eager press