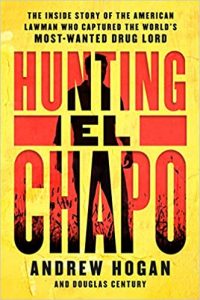 In 2006, fresh out of the D.E.A. Academy, Hogan heads west to Arizona where he immediately plunges into a series of gripping undercover adventures, all unknowingly placing him on the trail of Guzmán, the leader of the Sinaloa Cartel, a Forbes billionaire and Public Enemy No. 1 in the United States. Six years later, as head of the D.E.A.’s Sinaloa Cartel desk in Mexico City, Hogan finds his life and Chapo’s are ironically, on parallel paths: they’re both obsessed with the details.

In a recasting of the classic American Western on the global stage, Hunting El Chapo takes us on Hogan’s quest to achieve the seemingly impossible, from infiltrating El Chapo’s inner circle to leading a white-knuckle manhunt with an elite brigade of trusted Mexican Marines—racing door-to-door through the cartel’s stronghold and ultimately bringing the elusive and murderous king-pin to justice.

This cinematic crime story following the relentless investigative work of Hogan and his team unfolds at breakneck speed, taking the reader behind the scenes of one of the most sophisticated and dangerous counter-narcotics operations in the history of the United States and Mexico.